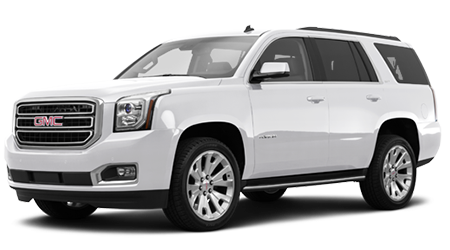 Cutter Buick GMC Waipahu serves Waianae, Kapolei, and all leeward and windward Oahu drivers with a premium selection of today's best GMC cars, trucks, and SUVs, including the all-new 2015 GMC Yukon SUV and Yukon Denali, an impossibly hearty hauler with fantastic styling, an updated V8 engine, and seating for up to 9.

According to GMC, the design of the new Yukon was patterned after a "fist in the wind" which we at Cutter Waipahu think is particularly fitting for windward GMC car shoppers. The body-on-frame design means that the Yukon takes skeletal styling from GMC trucks, but savvy styling and an engine that matches the Yukon's size, mean that the new Yukon handles well all around—enough to make you forget how substantial of an SUV this car truly is.

The 2015 GMC Yukon is, like the GMC Acadai, available in three trims—SLE, SLT, and Denali—with the Denali getting its own engine and special additional details.

Denali and non-Denali trims feature a V8 engine, though liter size varies (the SLE and SLT trims weigh in at 5.3-liters, while the Denali ups the ante to 6.2-liters), as does overall performance, with the smaller of the two V8s coming in at 355 horsepower / 383 pound feet of torque, and the range-topping Denali V8 packing a massive 420 horsepower and 460 pound feet of torque. Depending on trim and wheel base, the new Yukon SUV has a towing capacity of up to 8,500 pounds. Either way, though, both engines were crafted a three-pronged state-of-the-art technological attack thanks to the new Yukon's use of SIDI, Active Fuel Management, and Variable Valve Timing which combine to increase both engine efficiency and fuel economy.

While the exterior of the new Yukon is ruggedly handsome, the interior is a who's who of amenities and all-star standard and optional features rivaling luxury SUVs with much higher price tags. Standards on the new Yukon SLE include but are not limited to:

Each and every last 2015 Yukon is packaged (regardless of trim) with a standard 2" towing receiver with 7-pin harness, and fitting into the third row seating—large enough now for even adults—folds all the way to the floor, unlike earlier models.

Cutter Buick GMC Waipahu encourages you to schedule a test drive online for the new Yukon, whether it be one of the SLE or STL trims, or the impressive and more powerful 2015 Yukon Denali. Cutter Buick GMC takes pride in serving Waipahu and our neighboring Waianae and Kapolei communities, as well as all Oahu drivers looking for a premium selection of all their favorite GMC cars for getting across the leeward and windward parts of our fair island, and we look forward to showing you how a 2015 GMC Yukon can do that better than most!