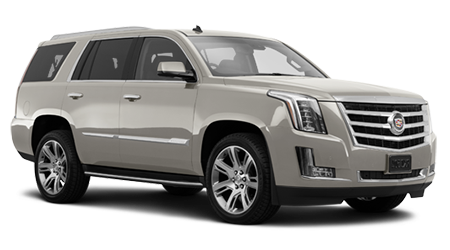 The 2015 GMC Yukon Denali is all new, with changes inside and out. Cutter Buick GMC in Waipahu, O'ahu knows all the changes and would love to show you if you're in Wahiawa, Kapolei, or Pearl City, HI.

The Cadillac Escalade is new for 2015 as well, with many of the same features, but the 2015 GMC Yukon Denali offers luxury without shouting about it.

Both the Escalade and Yukon Denali are luxurious SUVs offering plenty of features, space, and power. But the Escalade shouts about it to everyone who sees it. The Cadillac emblem on the bright chrome grill is huge, and the one on the tailgate is even bigger. The Yukon certainly has plenty of bright chrome trim, but compared to the Escalade, it's understated and much more refined in its appearance.

For that Cadillac emblem and trim, be prepared to pay dearly. The Yukon Denali (the Yukon model's top trim) and base Escalade are essentially identical in features and equipment, but the list price for the Cadillac is nearly $10,000 more. Why buy a base model Escalade when you can get the fully loaded GMC Yukon Denali in all of its glory for less?

Cadillac in trying to be as advanced as possible has a unique interior with fewer buttons and knobs, and more controlled via its CUE touchscreen and voice command system. GMC choose to keep the infotainment system and climate controls simple and user-friendly. Yes, the Yukon has an excellent IntelliLink touchscreen and voice command system as well, but it kept its buttons and knobs. If you are a technophobe, or wear gloves, or prefer to twist a knob without looking away from the road, the GMC system will be more to your liking. If you love your smartphone and crave integrated apps and gadgets, you'll love the Yukon Denali even more because all that tech is still available if you want to use it. If you want a luxury full-size SUV, the smart money is on the 2015 GMC Yukon Denali. Cutter Buick GMC in Waipahu, HI would love to take you out for a ride and show you all the new features GMC added for 2015